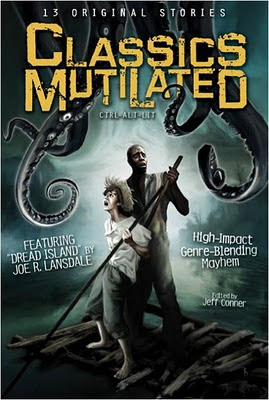 I couldn't really get on board the whole monster-lit thing.

On paper, it's a neat idea. Take all those tepid, boring old novels we read in junior high, add a couple ninjas and a horror from beyond, and BLAMMO! instant pop-novel trend. When I'd heard about Pride and Prejudice and Zombies, I haunted bookstore after bookstore trying to find a copy. Ultimately, I couldn't quite finish it. I found the juxtaposition too jarring and I was constantly being pulled out of the narrative by the constantly shifting writing styles.

My best friend gave me a copy of Classics Mutilated, the monster-lit anthology. In the introduction, editor Jeff Conner wrote about drawing inspiration from the mash-up music scene. I dig the same sort of of music (go check out Bootie's website for examples) and I eagerly settled into the stories.

Anyway, I like to review anthologies on a story-by-story basis. Most anthologies, especially ones by different authors tend not to have strong thematic ties beyond their core subject matter. Also, it's fun to nitpick. So with that, my review of the tales of Classics Mutilated. 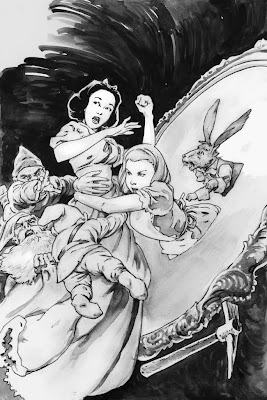 The Fairest of Them All: It makes some sense to start the anthology with an Alice in Wonderland/Sleeping Beauty/Cthulhu mash-up. All are well loved, all are very imaginative works, and all have strong imagery. Still, there's some truth to the old chestnut about too many cooks spoiling the pot and this story is a good example of a mash-up gone wrong. Too much stuff goes on, too many things need to be explained, and the story gets lost in the details. Finally, the writer shoehorns Alice so hard into the villain role that his interpretation bore little resemblance to the original character.

All in all, not a good start.

Anne-Droid of Green Gables: I adored this story. Steampunk ain't really my cup of tea and I've never read the Anne of Green Gables stories, but this story crackled with warmth and charm. There's a tendency in genre fiction to tell big, bombastic stories of violence and lust and death, but this story of a family coming together and embracing a curious little robot absolutely charmed me.

Little Women in Black: Eeeeeeeerie. I don't quite have an idea about what the hell is going on in this piece, but the characterization is strong and the horror is creepy and mysterious. I'm gonna dig out more Rick Hautala stories after this.

Death Stopped For Miss Dickinson: 15 year old me would have loved this story. Chronicling the emotionally rich love affair between Emily Dickinson and the specter of Death, this story is florid and melodramatic and moody. As an adult, I find the Gothic trappings a bit overwrought, but there's something in this story that kept me hooked. Plus, the author clearly has a great reverence for Dickinson's work and threads the poems into the narrative.

Twilight of the Gods: Riffing on both the Twilight series and Norse mythology, this clever little parody boasts some of the funniest, most charming storytelling of the book. Loki replaces the Bella character and his rakishly sociopathic take on her romance is absolutely hilarious. Of all the stories in the book, this is the one I'm most likely to recommend to people. 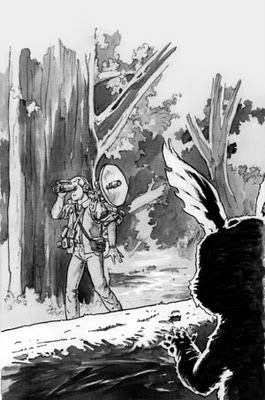 Pokky Man: Probably the most unique mash-up in the book, Pokky Man explores the Pokemon universe through Werner Herzog's famous documentary Grizzly Man. The story follows a former trainer who has become obsessed with the Pokemon and attempts to live among them, leading to tragedy and terrible revelations for the Pokemon universe.

There's a good argument to be made that this is the best story in the anthology. Many of the mash-ups are little more than gimmicks cleverly done, but filtering the sterile, consequence free world of Pokemon through the obsession Herzog portrayed in his tale. At first it's a simple parody, but the trainer's eventual fate is incredibly eerie in the context of his world. The writer of this story works in the video game industry and his wealth of knowledge of the game's universe brings the horror to life.

Vicious: There are a couple of stories in the book dealing with rock stars and their legacies. It's not hard to see why; rock stars create their own grand, larger-than-life mythology and it's easy to add a little magic into their lives.

Vicious absolutely works as a character study. The writer is clearly a fan of Vicious' self-destructive persona and captures his voice and personality very well, spiraling between the arrogant highs and self-loathing lows of a junkie rock star. While I don't know if it's a hundred percent authentic, it captures the flavor of the man. The story itself isn't quite as good. It's not so much of a plot and more a series of shitty magical things that happens to Vicious during the New Orleans leg of the tour. Still, it's definitely worth reading for the strength of the writing. 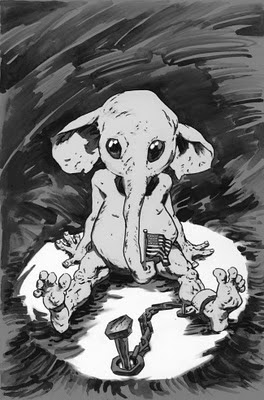 The Happiest Hell on Earth: Probably the most ambitious and imaginative story in the book, Happiest Hell crosses Dr. Moreau's island of vivisected freaks with the colorful world of Walt Disney.

Prior to reading the story, I never really realized how much The Island of Dr. Moreau got under my skin. The process of creating the hybrids is absolutely horrible, and the painfully unnatural way the creatures live made me cringe. Once they leave the island for Hollywood, the story begins to feel too crowded and rushed. There are a lot of ideas in the piece and it feels like it should be a novel. It's a fine story otherwise and one of the best examples of mash-up monster lit fiction in the book.

From Hell's Heart: I grew up reading Nancy Collins' vampire adventure stories. They were Urban Fantasy before the genre became all saturated and florid. Her take on the insane Captain Ahab is a fun pulp-feeling adventure riff, with fast action and tons of suspense. I rocketed through the story in record time although in making Ahab a mournful protagonist, Collins loses a lot of the insanity that is the hallmark of the character. Still, anyone who can't dig a story about a hellbound mariner stabbing a wendigo with a magical harpoon ain't someone I want to know.

Frankenbilly: Frankly, there wasn't enough Western stories in this book and I was happy to see Frankenbilly in the list. This remake of Interview with a Vampire as told by a reanimated Billy the Kid doesn't always work. It feels a bit like the story got away from the writer about midway through. Fortunately, the dialogue is crisp and the story is just goofily absurd enough to remain engaging throughout.

The Green Menace: In some ways this story works and in some ways it absolutely doesn't. On one hand, it's a fun little tale about a group of lakeside vacationers besieged by killer frogs cooked up by a former Nazi scientist. It's tense but never needlessly grim and it's a blast to read. On the other hand, one of the characters is disgraced former Senator and commie-hunter Joe McCarthy. In reading the notes on the story, writer Thomas Tessier said that he wanted to put a man who was a master at commanding fear into a terrifying situation. Unfortunately, that aspect of McCarthy's character never really comes out and he reads as nothing more than an unpleasant dude with too many guns. As a mash-up it's not much of a success but it works just fine as a fun action yarn.

Quoth the Rock Star: The low point in the anthology, this floridly-written tale of the meeting between Jim Morrison and Edgar Allan Poe features a fight between their two spirits, manifested as a raven and a lizard. By that point, my eyes glazed over.

Dread Island: The famous closer to the piece, Dread Island is Joe Lansdale's fusion of Huckleberry Finn, Cthulhu, and the stories of Uncle Remus. It's a tense horror tale, full of terrible places, apocalyptic fury, and hungry gods in the sky.

Lansdale, to his credit, doesn't attempt to ape Mark Twain. Lansdale writes like Lansdale, and his take on Huckleberry Finn rings authentic. Long time fans of Lansdale's work (he's one of my favorite writers) will recognize a lot of the tropes with his other stories, but this one holds together very well. My one complaint is that it requires more knowledge of the source material than I had, especially with the surprise cameos by famous people throughout history. Still, it's a fine adventure horror yarn. 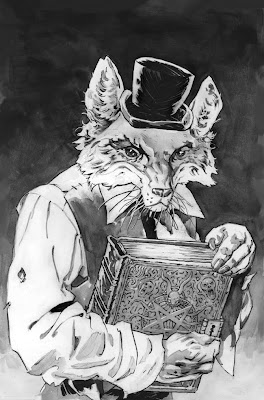 I'm not really big on anthologies in general. Most of them are wildly inconsistent and it takes effort for me to constantly get reinvested in a new story. But Classics Mutilated is a strong collection of tales. This stuff probably works better in a shorter format anyway, before the absurdity of the individual tales causes them to collapse upon itself.

I'd recommend this book for monster-lit fans, people who like really quirky writing, and anyone who wants to see Huck Finn escape the clutches of Cthulhu himself. 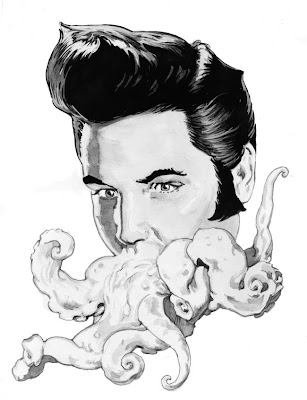 I've been wondering if this was any good, since the whole classic literature/horror mash-up genre seemed to be tapped out almost as soon as it started. I'll be sure to check it out now!

Sorry "Fairest of Them All" didn't grab you, but I'm glad you enjoyed the rest of the book. I'm really proud to be a part of it. 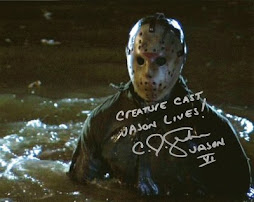